My daughter is now 19. For the past several years, life as a teenager took precedent over following a completely gluten-free, dairy-free diet. She did stay gluten-free for the most part – she hated being sick or taking even the slightest chance she might throw up. She has a total fear of that. Thank goodness! But the milk part was another story. Even though we had her tested and she tested positive to an intolerance to milk, she continued to believe she could drink it.

Can’t even tell you how many times I heard that. I tried over and over again to try to make her see that maybe milk was really an issue. But many of you with teenagers may know once they get something into their heads – that’s it. Done. It would have been easier to move a mountain, than get her to change her mind.

From the time Kelly was 16 or so, she began to put weight on – a little bit here and there. I suggested that going both gf and dairy-free could sometimes help with weight loss. That landed like a ton of bricks onto my daughter’s deaf ears. Nope. She wanted no part of that.

Well, since June of last year, Kelly has not had any gluten, dairy or corn. It’s been the best thing for her both mentally and physically. Mentally, because she is a completely different person without these foods in her diet. Night and day. Really. When she ate those foods she could be meaner than mean and then some. I discuss it more in my blog post, Glad to Have “My Daughter” Back – How Gluten Affects the Mind. 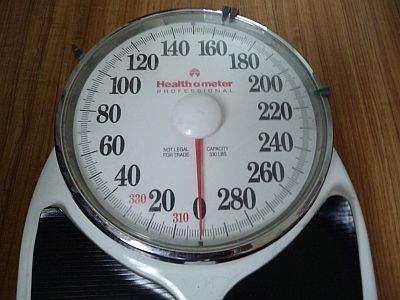 And physically, there’s no doubt removing these foods has really helped my daughter, too. Yesterday we finally found our scale. It’s been packed up since the move. Kelly got on it and could not believe what she was seeing – she had lost an incredible 44 pounds!

And she looks so good! I’m so happy for her, because for anyone carrying around extra weight, no matter what you say, can really slow you down and just isn’t healthy. I’m happy to say that I even lost ten pounds since the last time I had checked. And for a cookbook writer who’s always testing food, that’s more than great news!!! You know what they say – never trust a skinny chef! Still, a few pounds from “skinny” – so I guess I can still be trusted. 🙂

Should You Follow a Gluten-Free, Dairy-Free Diet Just to Lose Weight?

There are many books out there promoting following a gluten-free diet to lose weight. I actually don’t believe it was just cutting out the gluten and dairy that prompted such a weight loss for my daughter. I think cutting out so many processed foods, too, has been a big reason Kelly and I have lost so much weight. As I’ve mentioned we’ve become more and more sensitive to gluten and cross-contamination and because of this had to eliminate so many processed foods from our diet. I think that may clearly explain my weight loss. Because for me, losing any weight at all, is just about a miracle! Thank goodness for small miracles!