Glad To Have “My Daughter” Back – How Gluten Affects The Mind 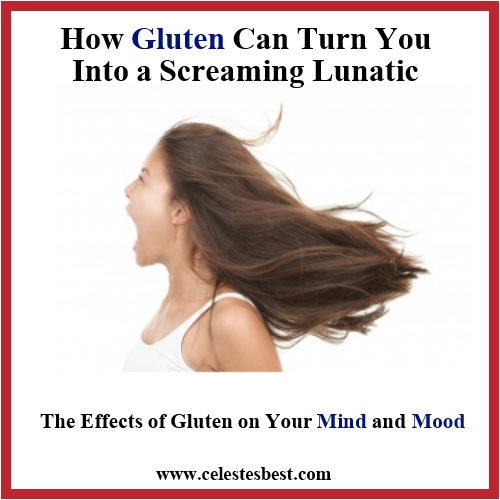 My eighteen-year-old daughter Kelly was away for the last 6 months and is now back home. But that’s not what this posting is about. Although I’m happy to have her back home again, I’m ecstatic to have “my” Kelly back home again.

Gluten can affect so much more than people know. For Kelly; ingesting gluten, corn and dairy sent her on an emotional roller-coaster ride. Back home with us, she’s eating an allergen-free diet and she’s a different person.

We had a joke in our family that we loved when Kelly was sick. Sounds strange and sadistic to even write that, but when she was sick, she barely ate anything and turned into this angel – this sweet, sweet angel of a child. But that also told me something – food was affecting not just her body, but also her mind.

Some of the Effects of Gluten, Dairy and Corn on the Mind

Here are just some of the ways gluten, dairy and corn affect my daughter aside from the usual intestinal issues:

Mood Swings: I’m talking wild crazy moods swings, here. She’d begin a conversation yelling at me, and a few second later she’d end it with, “Mom, I love you.” It would make my head spin. 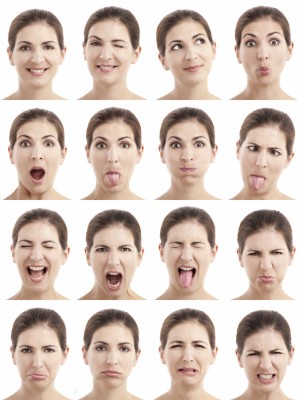 The Many Moods of Food Intolerances

Forgetfulness and Total Lapses in Memory: The proteins in wheat, corn and dairy affect the brain to such a degree that my daughter would forget half of what she told me. I often wanted to carry around a tape recorder or a notepad to record or write down what she said so that I could replay or show her what she’d actually said and done. I can not even begin to tell you how many times I’ve heard, “I never said that. I don’t know what you’re talking about, Mom, that’s not what I told you.”

Depression: With the brain being so affected it’s no wonder depression can be an issue for so many. For Kelly it was more like, “Oh, woe is me,” kind of attitude, “Life stinks, there’s nothing I can do about it.” 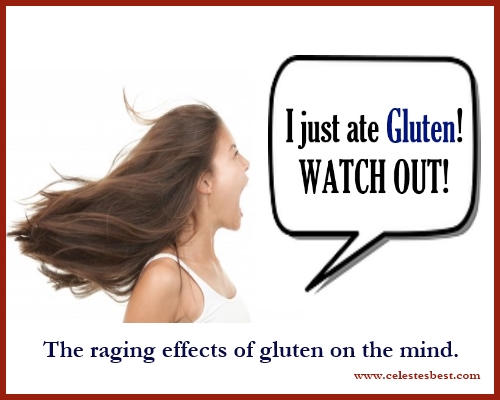 Rage: This is not one of Kelly’s traits inherently, but after ingesting some gluten or dairy, watch out. No, really, I mean, “Watch Out!” She could turn into a screaming, raging lunatic.

Delusional Thinking: One of the hardest things to deal with, I think. When a person’s thinking becomes so far from reality it is almost impossible to reason with them.

Spontaneous Living: Didn’t know quite what to call this, but spontaneous living seemed to describe it well.  During bouts with gluten, corn and dairy, my daughter would live in the moment only (okay, that’s a good thing) but without regard to the long term. She would get caught up in the moment and that was the only thing that mattered then.

These are just a few of the other effects of gluten, corn, dairy and other food allergies, sensitivities and intolerances you just don’t hear about all that often. And believe me, I’ve experienced many of these effects myself, too. I think as many more people are discovering their inability to digest and assimilate these proteins, you’ll begin to hear a lot more about these other lesser known effects.

Most people (and other family members) often didn’t understand Kelly’s behavior. They all viewed the outcome, while I was always looking at the cause.

Can’t even tell you about how many times I was given parenting advice – “You just need to be tougher on her. That’s all she needs.” But I knew that wasn’t what she needed. And just how do you reprimand your child when you know they’re really not behaving on their own volition?

Without doubt, the teenage years were challenging at times. The teenage years can be tough for a parent even without food intolerances. Can you imagine trying to tell someone who’s been eating gluten, corn and dairy and is having dramatic mood swings, is forgetful, is having unrivaled fits of rage, and bouts of delusional thinking that it’s the food causing all their issues? Shaking my head over here. Let me tell you, it wasn’t an easy sell. And on top of that, you have a teenager who wants to do what all the other teenagers are doing – hanging out at some fast food place. Even though she still tried to eat gf, all the cross-contamination was having an effect on her.

Here’s a conversation we had on a continual basis during those years – Kelly would tell me, “No, Mom, I’m fine, I can eat foods that contain milk. It doesn’t affect me.” Even though I reminded her time and time again, that the testing had proven otherwise and she shouldn’t be eating anything with dairy.

And here’s another conversation we often had, “Mom, there’s nothing wrong with me or how I’m acting. None of friends have a problem with me – only you!”

And often because of this battle going on in her head, I have to add here, she sometimes wasn’t the best judge of friends. My one saving grace, my ace in the hole – I could always count on a good week, completely without gluten, corn or dairy to weed out those that were less than favorable. Happened every time. She’d come to her senses so to speak – or I guess it was more like the proteins in gluten and dairy left her senses.

Kelly is eating a completely gluten-free, dairy-free, corn-free and a few other allergens-free diet. She now sees how important it is to eat this way and is very careful about her diet.

I remember when she first came back home and as the gluten, dairy and corn proteins left her system, I started to see the “real” Kelly returning, she told me, “Okay, Mom, if you say one more time you’re so happy to have “your” Kelly back, I don’t know what I’m going to do.”

But she has no idea how much she’d been missed! I’m sure there are a lot of parents out there who feel the same way I do. Parents who can see the true essence of their child locked away and hidden in their body – a body inundated with intolerances to food.

My Kelly is bright, smart as a whip, talented, funny, even-keeled and happy. Happy. That’s the one thing I missed the most. Seeing my daughter smiling (brings tears to my eyes just thinking about it) and happy.

What parent wouldn’t do all they could to make that happen?