Can You Reduce Egg Allergies By Eating Eggs? 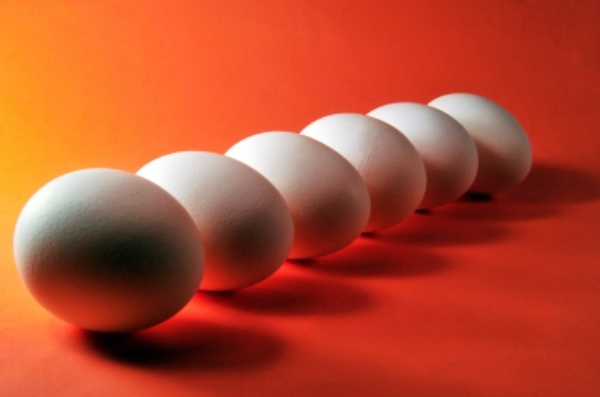 Every month in the United States, 6 million eggs are produced and distributed to food service establishments, retail stores, food manufacturers, and exporters. But the incredible, edible egg isn’t so edible for many and is one of the most common food allergens.

More than 600,000 Americans are allergic to eggs, but 70 percent of these individuals will outgrow egg allergy symptoms by age 16. My own daughter, Kelly, tested sensitive to the egg protein in the yolk.

The most common allergic reaction to eggs involve the skin. Many babies and children faced with egg allergies often develop eczema. Other reactions can be somewhat minor such as hives, but some are more life threatening such as anaphylaxis.

Ask Me About My Peanut Allergy blogsite.

The Egg Desensitization study involved 55 children ages 5 to 11. (15 children simply received a placebo of cornstarch powder.) After ten months 55% of the children were able to eat five grams of egg white powder. These children then went on to the second phase of the testing and after 22 months, three-quarters of the children passed an auto-immune challenge and were able to eat 10 grams of egg-white powder without having a reaction. Those who passed the second challenge then were told to avoid eggs for the next 4 – 6 weeks. After that, they resumed eating eggs and 28% had no allergic reactions at all.

Dr. Wesley Burks, chair of the Department of Pediatrics at the University of North Carolina, Chapel Hill, and a lead author of the study is a pediatric immunologist at the University of North Carolina in Chapel Hill. A pediatric immunologist helps children with allergies or other problems related to their immune system. He noted that besides avoidance, “we currently don’t have an adequate treatment for food allergies,” which can trigger severe and sometimes life-threatening reactions.

Dr. Burks also remarked that this study does offer hope that a treatment could be developed, but we’re not there yet.

“This is really the middle step in a 3-step process that gets something actually into the clinic. The next series of studies need to be aimed at understanding the safety better, understanding how the treatment needs to take place and more specifically which patients would be better suited than others.” ~ Dr. Burks

How Long Does the Desensitization Process Take?

This process can actually take several years. And in this study, overcoming an egg allergy took 2 – 3 years using the desensitization method. Eggs were gradually added to the diet, and every two weeks the amount of egg increased until subjects were eating the equivalent of five grams of egg white powder.  And if that produced no reaction, this amount was increased to 10 grams of egg white powder.

But even though the process was a lengthy one, for those with life threatening allergies, the study does offer some hope that children with these allergies may be able to eat more safely and without living in the constant fear of possible anaphylactic shock.

And unfortunately for a small percentage, this isn’t the right therapy. Five of the children had to drop out of the study early on because they had a serious allergic reaction.

If your child has a severe allergy to eggs or any other foods, this could well be a possibility for treatment. But it’s not something to try on your own and would require doctor supervision to best monitor your child’s heath and well being.