Did you know there’s a difference between hay and straw? Hay is a food source for feeding animals. Hay is actually a plant that is cut when it is alive and full of grain. Hay is often a mixture of grasses, such as ryegrass, timothy, or fescue – or it may be comprised of alfalfa or cloves.

Straw, on the other hand, shouldn’t contain any grain. Straw is the dried stalks of cereal plants, like wheat, oats or barley. It’s a by-product of harvest. It’s simply the stalks of standing plants after the grain has been harvested. The grain is cultivated by a machine that cuts it off of the stalk, removing the grain. If any seeds remain on the stalks, it’s by accident. The stalks are left in the ground and eventually die. Then after that occurs and once they are free of moisture, they are cut, raked, and baled. The baled straw can then be used as animal bedding, for erosion control, biofuel, home building, and of course, hay rides. Well, actually, technically it’s really straw rides.

Does the Straw on Hay Rides Contain Any Gluten?

I wrote a little bit about this in a previous blog post Vegetables Grown in Wheat Straw. Does the straw contain gluten? When wheat, rye or barley straw is harvested, the seed or the kernel of wheat is separated from the stalk. The seed is the part of the wheat plant that contains gluten. But could the wheat straw still contain some gluten due to dust and contamination from harvesting?

My husband, the farmer, thinks the straw couldn’t possibly be completely gluten-free as there’s no way to guarantee they’re getting all the seeds out. I’d have to agree with him.

Are Hay Rides Safe for Celiacs and Those on a Gluten-Free Diet?

So, the question is – are hay rides safe for celiacs and those on a gluten-free diet? I’m still not too sure of the answer on this one, even after all my research. My gut tells me no, they’re really not. The dust may contain bits and particles of gluten and every bump during that tractor ride, a little more may fly into the air. Searching through the celiac forums, there are a lot of conflicting opinions. Some find that bales of straw often caused a reaction, while others felt the straw was perfectly safe for those with celiac and gluten allergies and intolerances.

A Gluten-Free Option for Touring a Farm

If you’re like me and questioning the safety of a hay ride for you or your child, there may be another option. There are now wagons that ride behind the tractors that do not use hay for seating. A “hayless” hay ride or hay rides without the straw. The newer wagons are terrific for those with celiac and gluten intolerance or gluten allergies. My husband’s farm now has one. On his farm here, they use both a traditional wagon filled with straw bales and also a newer “hayless” wagon. 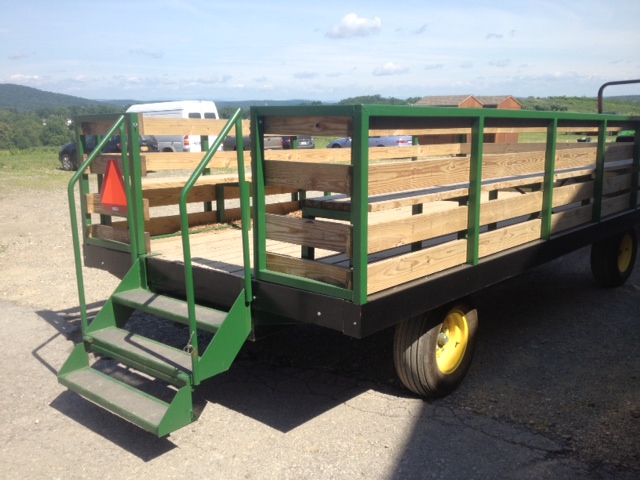 So What Do You Think?

Do you think hay/straw rides are safe? Is straw safe to be around? Do you worry about any of the dust from the bales? Leave a comment and let us know what you think.