I remember growing up, I’d often get mosquito bites. Just always chalked it up to part of summer. Mosquitoes have always loved me. But those little blood suckers loved me way too much.

Over the last ten years, things have changed for me. I noticed that I was the only one getting bit in our family. And if there was one mosquito in our house, we all knew it would find it’s way to me wherever I was – kind of like a heat seeking missile.

Okay, so a few blood hungry mosquitoes. No big deal. Until it became a big deal. I started to notice the tiny bumps after a mosquito had taken a bite had now turned into large, itchy welts. Okay, so a few itchy welts, still something I could deal with, I thought. Then one day, I got three mosquito bites on my arm. They were very itchy mosquito bites, but I knew better than to scratch them. That usually only made them worse.

Then something strange happened. My arm started to feel slightly numb. I looked at the bites and they almost seemed liked whatever toxin was in the bite was spreading through my veins. A bit frightening. For almost two years after that, whenever I’d get a mosquito bite, this same reaction would happen. I took photos to show my doctor who told me I was having an allergic reaction to the mosquito bites. 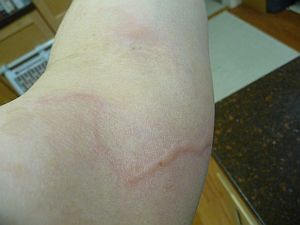 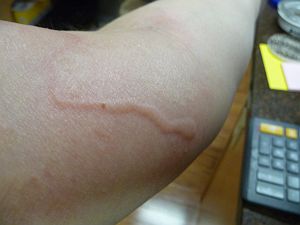 Wherever I went after the first time my arm went numb, I went prepared for another attack. I carried a tube of SssstingStop, a homeopathic remedy, with me to stop the reaction. But the fear of ever being somewhere without that remedy was always haunting me. So I began researching and researching. Tried every possible supplement to prevent mosquitoes from biting me in the first place. Ingesting garlic and vitamin B, which did seem to help a bit. Even tried carrying fabric softener sheets as many on-line had suggested. Sprayed myself with essential oils, too, before going outside. But nothing really seemed to work.

The Secret to Stopping the Itch of Mosquito Bites

Then I read something which sounded a bit off the wall, but easy to test out for myself. Someone had posted on a forum (and this forum had several hundred people commenting, so many others must be affected by this, too) that placing a small amount of your own saliva on a mosquito bite shortly after being bitten neutralized the toxin in the bite. Sounded a bit crazy, but I tried it. Amazingly, this natural remedy works better than anything else I’ve ever used. Now, given, I don’t do this openly in public, because people can be so weird about things like this, but for some, it may be a life saver in much the same way it is for me.

Not a Mosquito Magnet Anymore

And this does not make any sense at all, but I’m no longer a mosquito magnet. To say the mosquitoes are heavy here, where we live now in NY, would be an understatement. Sometimes it’s almost like a wall of these winged insects lying in wait. Normally, I wouldn’t even be able to go out with that many mosquitoes around unless I was covered from head to toe. But that’s no longer the case. Instead, my husband and my daughter are getting attacked and not me. Why? I have no idea. I don’t think I’ll ever completely figure these blood-suckers out.