Back To The Gluten-Free Bread Baking Test Kitchen 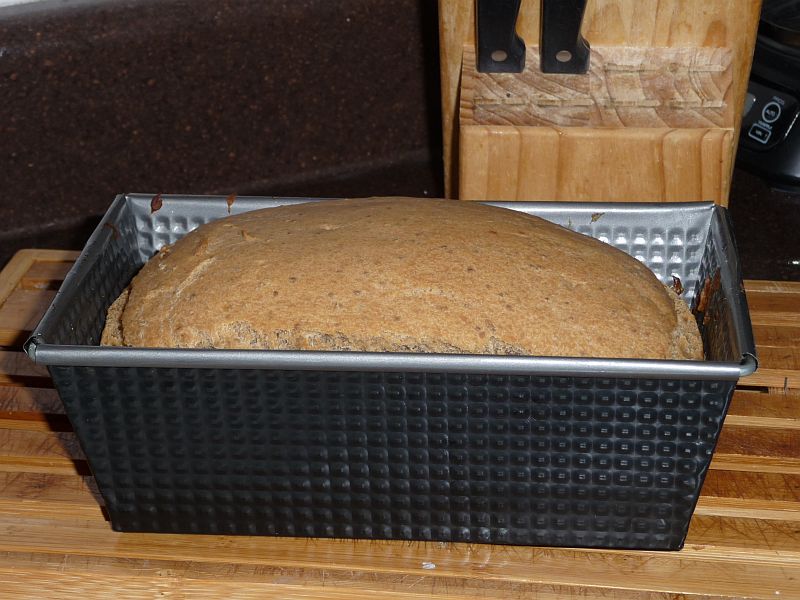 I spent several years developing the gluten-free, yeast-free bread recipes in my cookbook, Celeste's Best Gluten-Free, Allergen-Free Recipes. My goal was to create a gluten-free bread that tasted just like real bread full of gluten. Judging from my readers and their comments after they've tried my bread, I think I accomplished what I set out to do.

My Family was Disappointed

Some of the many, many test loaves I baked.
The stock pot if full of loaves, too.
My family was somewhat disappointed by this. Don't get me wrong, they love my gluten-free bread, but before with all the recipe development and testing, there was almost always a loaf (or two, or three, or more!) around to snack on.
My freezer was always full of loaves. I had bags and bags and bags of breadcrumbs. But as you all probably know, life has a way of getting busy and sometimes you don't have as much time on your hands. We still have bread, but it's not an every day thing.
So now, to say my guys were elated to know I'd be back in the test kitchen again, working on some new bread recipes that did not contain any sweet potato flour, was an understatement.

My husband was funny. I made two test loaves the other day. While adding the ingredients for one of the loaves to the mixing bowl, I must have gotten distracted and I couldn't remember if I had already added the konjac powder to or not. I hate when I do that. So I added it and it thickened up so much, I realized I must have actually put some in already. I baked it up anyway just to see how it would turn out. I've learned, just like in life, sometimes you make your greatest discoveries from what you thought were mistakes. My husband came home for lunch and ate a slice and said that the loaf just tasted okay, but not great. So I told him I'd just use that loaf to make breadcrumbs. "Oh no!" he told me. "No, I didn't mean that. I'll still eat it. It's fine. Just not as good as your regular loaf. No, no, leave it for me."

One of the test loaves I baked that had good results and could be sliced very, very thin.
Then later we were watching tv and my husband and my daughter started talking about the bread again. My husband had told me daughter when he got back to the farm that I was home making bread. Kelly's response: "Is she okay? Bread? Really, bread?"

Oh, my family is so funny, aren't they? And again, I have to remind them all once more that I'm not the only one who can make bread. But who is the only one who actually does make bread in this house? Me. I'm shaking my head. I have no idea why it's just me. My bread recipes are easy to make - no kneading, just mix in a mixer like you would a cake recipe and pour it into a baking pan. My guys like to cook, too. It really doesn't make much sense.
So, regardless, they're all happy to know I'm working on new recipes. And I love seeing the smiles on their faces as they walk through the door, smell the wonderful aroma of warm bread and then watching their eyes light up when they see the loaves cooling on the racks.